How To Get a Pure Gold HTC One For Free 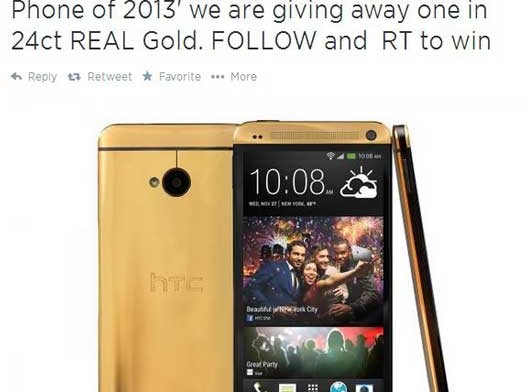 The HTC One is one of the hottest smart phones in the market at the moment thanks to its high quality aluminum body, dual front facing Boomsound speakers, Beats Audio software, Ultra Pixel camera technology and more.

Every one who likes Android and a device with plenty of features and amazing build quality should go with the HTC One. 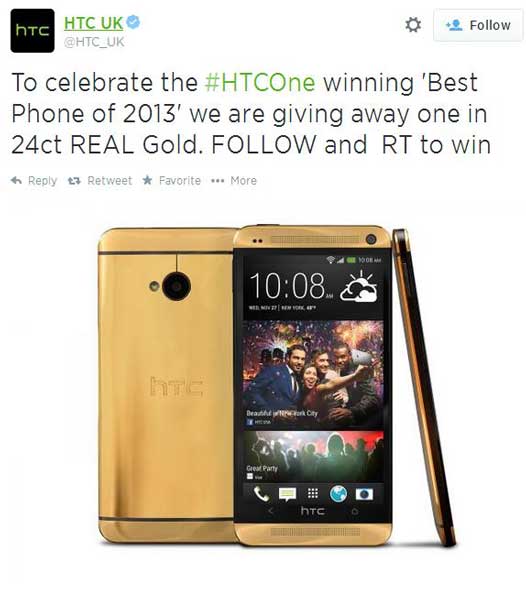 Some of you may ask, is there any phone with better and more premium body quality than the aluminum HTC One? Yes, there is and it’s the pure gold HTC One. Because the One was considered as the best phone of the year 2013, HTC decided to do a giveaway of the One. It is not a reguluar device, it is a unit with pure 24 carat gold on the outside and everyone can win it.

Because the original HTC One has been considered as the best phone, HTC is giving away the 2013 version (M7) instead of the 2014 version (M8) but nonetheless, who wouldn’t like a pure 24 carat HTC One M7 for free? If you live in the UK (United Kingdom) and have a Twitter account, you can easily enter.

All you have to do is to follow the official UK HTC page on Twitter and retweet the giveaway announcement. Once you do these two simple steps you have earned your entry to the giveaway.

The contest has started just today and it will end on June 29. Make sure to check HTC’s winner announcement because if you are the winner and don’t respond within one week after the announcement, another person will get the price.

You Will Be Able To Buy OnePlus One Without Invite Soon

Gold LG G3 Giveaway – How To Get One For Free

Giveaway: Oppo Find 7 and Find 7a