Galaxy S5 Survives After Being Burned With Gasoline 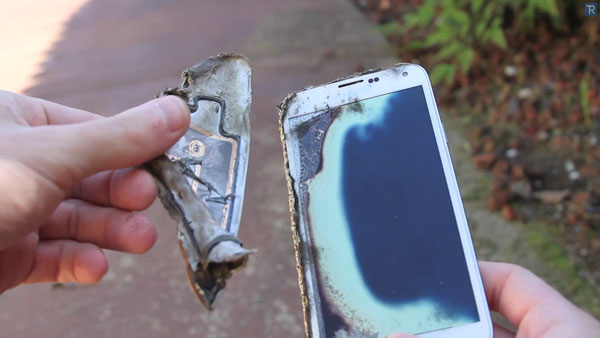 Galaxy S5 survives the fire test. The Samsung Galaxy S5 is going through the most extreme torture tests. Previously, it went through Water Test, Drop Test and even hammer test where the battery exploded releasing harmful gases. This time, the man who is torturing the Galaxy S5, TechRax, let the device burn with gasoline for a few minutes.

As many of you may think that the device would be gone forever, actually no. The Galaxy S5 successfully survived the fire test. Well, not successfully, but it did survive nonetheless. Half of the body, which is plastic, got completely melted. The 5.1″ Super Amoled display and the screen survived. Actually, only half of the screen because a part of the digitizer got damaged.

After TexhRax put out the fire, he tried to cool down the device. After a few hours of cooling down, he tried to retrieve the camera footage from the S5 as he enabled camera recording. Unfortunately, during the fire test, the Galaxy S5 turned off and it didn’t even save a part of the footage.

That’s unfortunate because the video would be beautiful with the flames surrounding the camera. So, the Galaxy S5 survived but with huge damages, as expected. Do you still think the Galaxy S5 is poorly built?