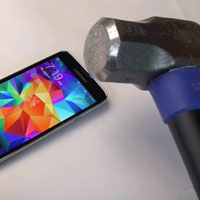 The Samsung Galaxy S4 battery exploded after the hammer test with just a few hits on the back of the device. Challenges such as Drop, Knife, Water and Hammer tests are always fun to see because it is interesting to see how modern smartphones withstand these tests. The Galaxy S5 didn’t really do to well.

One of the best Youtubers when it comes to destroying latest smartphones, tried the Hammer & Knife test on the Galaxy S5 which hasn’t been released globally yet. It started with a few knife tries. The back of the GS5 scratched a lot on the sides revealing the white part beneath the black color (Black Galaxy S5 Model).

After hitting the back cover a few times, Youtuber TechRax didn’t notice the battery popped out so he accidentally smashed it. The battery started becoming bigger and after two seconds it was releasing poisonous gases. TechRax immediately left the room where he was doing the test. Check the video above for the full action.