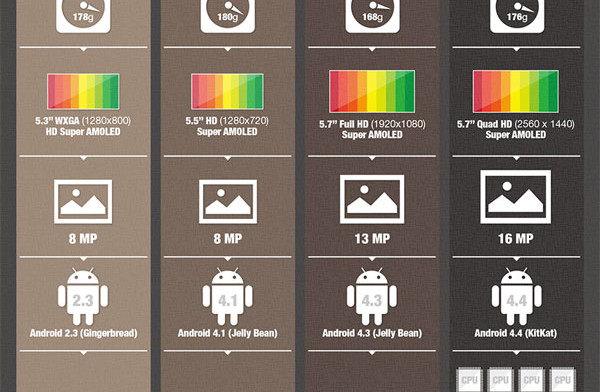 Full comparison between the Samsung Galaxy Note 4, Galaxy Note 3, Galaxy Note 2 and the original Galaxy Note 1. The Note series started as an experiment from Samsung. Four years back, 5″ devices were very rare and nobody used them because they were huge for that time.

During those years everyone was using a smartphone with a 4″ display. But the Galaxy Note 1 had a sudden success and a lot of people bought the device. Since it had such a success, Samsung continued the series with the Note 2, 3, 4 and every time more and more people seem to like it.

Also read: Why You Should Buy Galaxy Note 4 (Good Things)

A new interesting graphic has shown up where it compares official specifications of all four devices.  The infographic compares body dimensions, display types, front and rear camera resolution, Android operating system version, processor and number of cores, user memory and RAM and the battery size.

This is a nice picture to see how the Galaxy Note line has evolved throughout the years. It is amazing to think that no one liked and accepted the original Galaxy Note and now everyone can’t wait for the new version.

The same thing is happening with the Galaxy Note Edge. It is another experiment from Samsung. Until now, most of the users have said very good words about the device and looks like it is going to have the same success as its brother.

But until the official release, everything can happen. Samsung is experimenting with a lot of things lately including the Note Edge, Gear VR and Tizen OS.