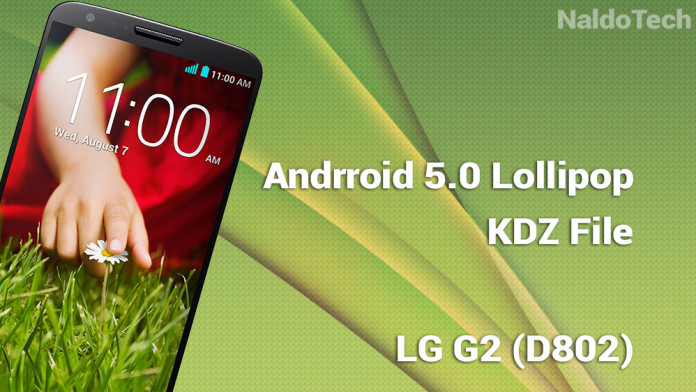 Good news for everyone who owns an LG G2 with D802 model number. LG has officially released the Android 5.0 Lollipop update for all LG G2 (D802) users and it can be flashed by everyone because it is a KDZ file. KDZ are the files that contain the firmware for LG devices.

The LG G2 is one of the most popular phones from LG that has increased the popularity of the company by offering a unique design with buttons on the back and the latest hardware possible. When the phone was originally launched in August of 2013, it came with Android 4.2.2 Jelly Bean. A software release updated the phone to Android 4.4 KitKat.

Now it is time to update your phone to the greatest and latest Android 5.0 Lollipop firmware. Since the update is in the form of KDZ file, you need to have a flashing tool. Follow the guide below to learn everything you need to flash Lollipop on your phone.

Download and install LG G2 USB drivers. This way the phone will be able to communicate with the PC.

Make a backup of the most important data because they will be lost.

Now simply wait for the file to get installed and reboot your phone. Enjoy your LG G2 running on official Android 5.0 Lollipop.