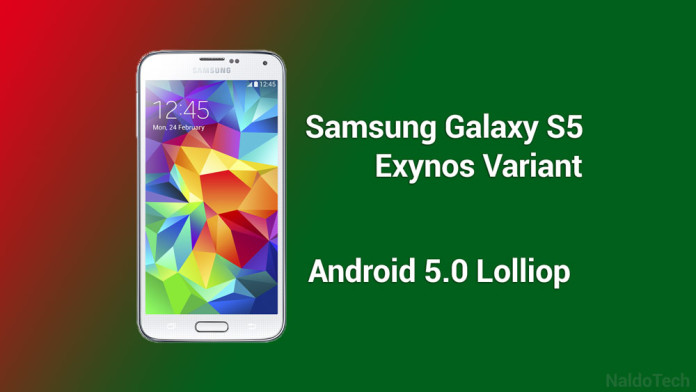 Originally launched in summer of 2014 by Google during the Google I/O variant, Android 5.0 Lollipop only hit first devices during November when Google rolled the firmware for its devices. Since then, this OS variant has seen only growth. Not a slow growth like KitKat which after a year of its release, only a few phones were rolling it. The Lollipop version is not only the biggest Android update but also the fastest growing OS version with most of Android flagships already running it even just after a few weeks.

The manufacturer that has taken the job of updating all its devices to Android 5.0 Lollipop very seriously is Samsung. It took Samsung only two weeks to update the international variant of the Galaxy S5 SM-G900F to Android 5.0. Later on, other variants started receiving it like the Korean model and even carrier branded units like the Verizon S5. Now, it is time for the other international Exynos variant, the Samsung Galaxy S5 SM-G900H.

Samsung started rolling it out on the Kazakhstan region and all users located there can already download and install it. If you are a Galaxy S5 SM-G900H owner and do not live around the Kazakhstan region, do not worry. Sammobile has captured and released the official Lollipop firmware tar.md5 file. So, follow the guide below and update your Exynos Galaxy S5 to Lollipop.

Charge your phone so it does not shut down during the flashing process.

Here is some information about the firmware:

That is it. You have installed the official Android 5.0 Lollipop firmware on the Galaxy S5 Exynos SM-G900H variant. So far, we love it. The UI is smoother and overall better.