How To Enable Developer Options & USB Debugging on Android 5.0 Lollipop 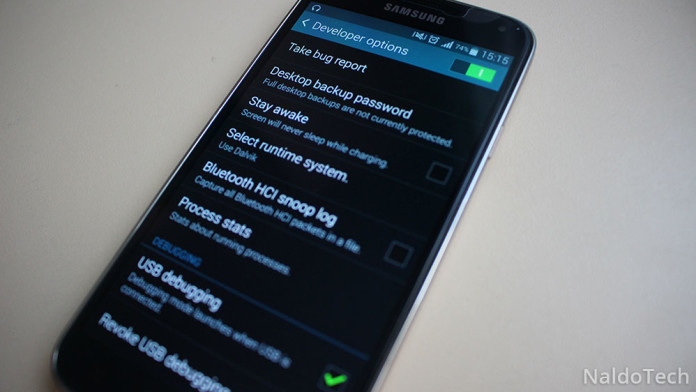 Android is an amazing operating system for mobile phones which is used on millions of devices. Being open source, Android OS can be used on many devices and it is not limited only on a small number of phones like iOS. iOS is limited only on a certain devices like iPhone, iPod and iPad.

But Android, since it is open source, can be used on every device, for as long as the manufacturer takes the code and optimize it for a specific hardware. There are amazing people called developers which work very hard to develop different software.

There are custom ROMs, mods, kernels, custom recoveries and themes that can be installed on an Android device. With that being said, there is something that every user should do before starting customizing. That thing is enabling Developer Options and USB Debugging.

“Developer Options” is an option that can be found in the Settings menu. It is a menu which contains settings that are designed for developers and those who want to test their devices.

One of the most important option that is found inside Developer Options is “USB Debugging”. No matter what you do with your phone, for as long as it is related to software modification like installing ROMs, kernels and mods, you need to enable “USB Debugging”.

On older Android versions, Developer Options was available under Settings but since Android 4.3 Jelly Bean, then continuing with 4.4 KitKat and 5.0 Lollipop, it disappeared.

Well, it disappeared from the eyes of normal users but if you love development, you can enable it again. Since 4.2, the option is hidden and it takes a few steps to enable it.

Now that you have enabled “Developer Options”, then enabling the other option is a piece of cake.