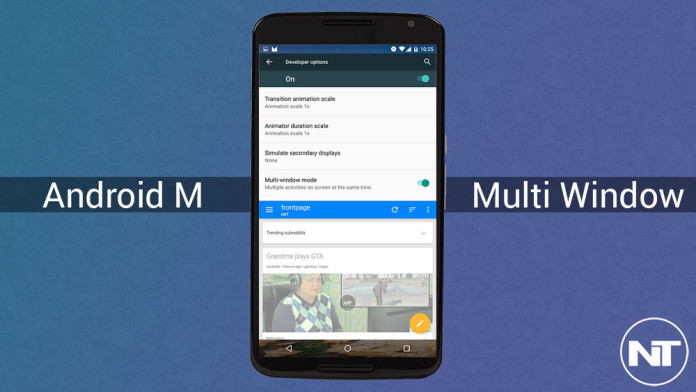 Android M has adopted a new mode called Multi Window which is exactly the same as the one found on Samsung Galaxy devices where you can use two applications at the same time without having to close one in order to use the other one. The way this mode works, basically, the window of one application takes half the screen of the device, leaving space for another app. When both applications are activated, they both take half of the screen each and the user can switch between them for increased productivity.

Google didn’t say anything about this feature during Google I/O and it is not enabled by default. However, developers found out this capability by taking a look at the base code and turned out you can turn Multi Window on with a few tweaks and system modifications without needing root access. If you have flashed the developer preview of Android M on your Nexus 5, 6 or Nexus 9 you have to do a few things to get Multi Window up and running. It is not a simple task but you will be able to do so by following the detailed guide below.

You will need a few things to make Multi Window possible on your device, so make sure to get everything required.

Enable USB Debugging from the settings panel. This will ensure a secure connection between your phone and the PC.