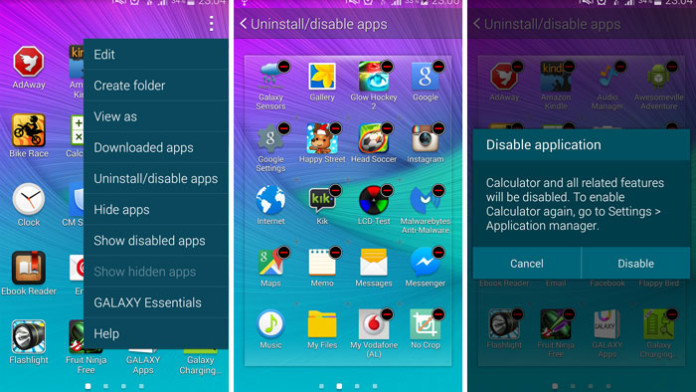 When you grab a Galaxy Note 4 and use it for the first time, you will notice the amount of applications that it comes with. No, they are not user downloaded apps. They come as pre-installed system applications which are often called as bloatware.

Most of these apps are from Samsung which are used for various features which are also called “gimmicks” most of the times. It is not a bad thing to have so many applications you might think. At the end, you put all your favorite apps on the front page and group them together in a folder so you don’t have to spend hours finding the app in the app drawer.

Also Read: How To Remove Bloatware from Samsung Galaxy S5

But, there is something that these apps do. They use precious memory space and use a lot of battery life. Only one bloatware app can vary from 50 MB to 100 MB in size. Then think that there are around 5-15 other similar applications which take 1 GB to 2 GB of memory space.

It is a known problem now that Samsung Galaxy devices suffer from low space problems. A 16 GB Samsung smartphone has only 10 GB of usable memory because the rest is taken by bloatware and software features.

If that would be the only problem, that would be a great news. But these bloatware apps on the Samsung Galaxy Note 4 not only use a lot of space but also spend a lot of battery juice.

Even though you rarely use them, they run on the background, draining the battery and sometimes causing problems like freezing and overheating.

This method will prevent apps from running on the background, saving battery life. But they still use memory space.

This will completely remove the application from the phone. This way, you save battery and also precious memory space.

How To Remove & Uninstall Bloatware on Samsung Galaxy A42 5G