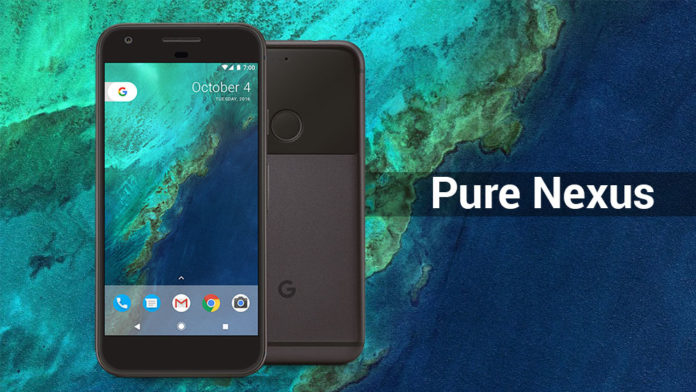 The Google Pixel and Pixel XL are Google’s current flagship smartphones, released on October, 2016. Both phones replaced the iconic Nexus line, and are the successors of the Nexus 6P and Nexus 5X.

Being Google smartphones with pure Android Nougat builds, the support for these two devices is quite big, with developers creating new ROMs with new features and with added stability. One of the ROMs that you should install on your Pixel or Pixel XL if you are looking for new adventures, is the Pure Nexus ROM.

The Pure Nexus ROM, or as the developers call it, the Pure Nexus Project aims to bring new features and added stability to the already stable Android Nougat build on Pixel handsets. It is one of the most stable ROMs one can install with tested features and minimal bugs and issues.

The Pure Nexus ROM comes with a long list of improvements, features and bug fixes. It has all stock Nexus features, it is based on an Android 7.1.1 AOSP build, and has support for Busybox, Init.d and Addon.d.

Thanks to PureNexus settings, you can completely customize the device when it comes to the lock screen, notification drawer, status bar, navigation bar, power menu, media and notifications and much more.

The ROM features added advanced reboot menu, PureAmbient display options, finger gestures and customizable notifications. It is a must-install ROM if you want a feature-filled, stable build for your Pixel or Pixel XL.

The installation process is fairly simple. You need to be on the latest bootloader, radio and vendor image to correctly flash the ROM. Then you need a custom recovery such as TWRP to wipe data, perform a factory reset and then flash the Pure Nexus ROM.