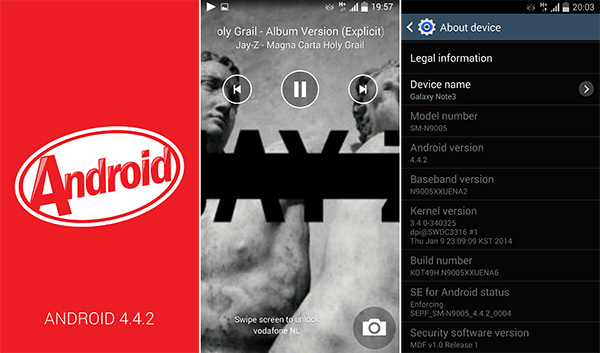 This means that the firmware is very stable with no bugs at all and has already rolled out in some countries and can be updated OTA (Over The Air).
As on the Galaxy S4, this update brings two noticeable changes aside performance improvements: white status bar icons and a new lock screen design.

If you want to get the latest version of Android on your Galaxy Note 3 but it is not yet available in your region (May take months to reach your country), don’t worry. You can download the firmware and manually flash it on your phone.

If you downloaded the firmware but don’t know how to install it, follow this guide here. This tutorial is for the Samsung Galaxy S4 but the installation process is the same as on the Galaxy Note 3.

Note: This version is compatible only with the Snapdragon SM-N9005 version of Galaxy Note 3. If you install it on other Note 3 versions you can brick your phone.

So, 2013 Samsung flagship devices received Android 4.2.2 KitKat. Now it’s time for 2012 devices like the Galaxy S3 and Galaxy Note 2 to get the latest version of Android.