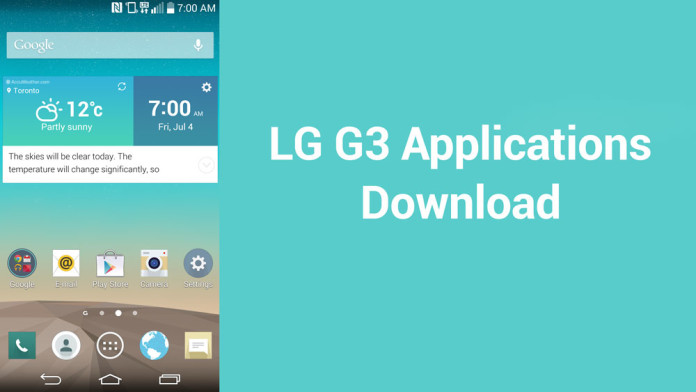 Download LG G3 launcher, theme and weather widget for Android devices. The LG G3 has just been launched worldwide and its applications and features are available for a lot of devices already.

The first port was the LG G3 Smart Keyboard application to the LG G2. Now, the launcher, theme and weather widget are also available to download and install. The user interface and launcher of the new LG G3 has changed and it’s noticeably better than on the LG 2.

The user interface is simpler yet it has more functions and features available. The color scheme is blue as almost everything is blue, purple and green. Starting from the icons, widgets and notification drawer shortcuts, they all have a nice blue tint.

The launcher is close to stock pure android. It has the app drawer shortcut in the middle and two applications on each side. The weather widget has also changed. Now the widget is split into two parts: the first one tells the weather and temperature whereas the second one tells the date and time.

These applications have been taken from LG G3’s system dump and are available to download and install for everyone. Download LG G3 launcher and weather widget here. Once you have downloaded them, install the apps as normal APKs. If some of them don’t install, manually put the APK file to System > App.