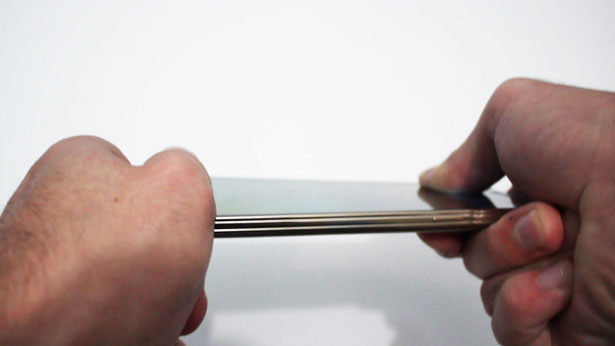 We already know that the Apple iPhone 6 Plus bend very easily. So easily in fact you simply need to apply a bit of pressure with your bare hands and the phone will break. This happens because of bad design of the phone. Read the full explanation why iPhone 6 Plus can easily bend for no reason.

Now that we know what happens to the new Apple big phone, how do Android devices fare on a bend test? There are many Android devices with different build materials. There is the HTC One M8 which is the best built phone with full aluminum body. Then there is the Galaxy S5 and Galaxy Note 3 which have plastic materials and Nokia Lumia which has resistant polycarbonate body.

Also Read: Watch iPhone 6 Plus Getting Bent Under Normal Force

We take all these device and put the through the bend test. The first device is the Samsung Galaxy S5. No matter how much pressure was applied on the phone, it didn’t break or bend. Then, a twist test was done on the phone. Strangely enough, the Galaxy S5 twisted a lot but it went back to its original position.

The same thing happened with the Galaxy Note 3. It got bent but then it immediately returned to its original shape. This is because these two devices have plastic materials which make them flexible but they have a magnesium alloy frame inside which makes them impossible to bent or destroy. 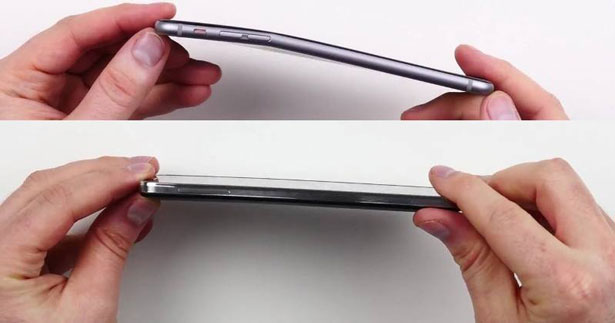 The HTC One M8 suffered more damages. A part of the screen popped out for a second but then it snapped back in its place. The Moto X 2014 variant was the clear winner of this test. Not only it didn’t bend but it didn’t even move just a little bit. It is sturdier than every other phone on the market.

And finally, the famous Nokia. Nokia devices are known to have strong bodies which are indestructible. The bend test on the Nokia Lumia suggested that while the body is strong, it can get destroyed with a little bit of force. At the end, these tests all prove that plastic is the best material when it comes to bending while aluminum does a very bad job.