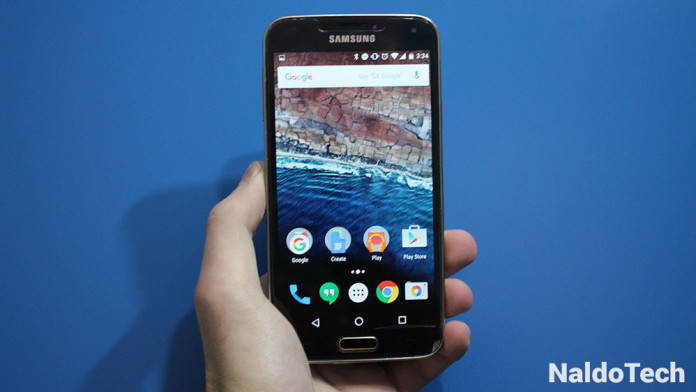 Samsung has released a list of devices that will be receiving the official Android 6.0 Marshmallow update and the Samsung Galaxy S5 is one of those devices. Until now, LG is the only manufacturer to have updated its flagship to Marshmallow (LG G4).

While the Samsung Galaxy S5 is planned to receive an official build of Android 6.0 Marshmallow, it might take a while for the update to roll out since the primary update device for Samsung is the Galaxy S6.

If you are happy enough with Android 5.0 Lollipop coupled with TouchWiz experience on your Samsung Galaxy S5, then we suggest you to wait for the official TouchWiz Marshmallow update which will come out in the following months.

If you can’t wait that long, then you can use the stock AOSP based ROM which features Nexus-like Android 6.0 Marshmallow firmware. If you have the Qualcomm Snapdragon Galaxy S5, you can try the newly released CyanogenMod 13 ROM made by albinoman887.

Even though the CyanogenMod team hasn’t released any official CM13 builds, the CM source code is already available for developers to create ROMs based on Android 6.0 Marshmallow.

CyanogenMod 13 ROM for the Galaxy S5 comes with a few bugs. CyanogenMod features have yet to become available and external SD cards can only be mounted as portable for now.

Make sure you have a custom recovery flashed on your Samsung Galaxy S5 such as TWRP or PhilZ Touch. Download the ROM from the download links above as well as Android 6.0 Marshmallow Gapps.

Move both files to the internal storage and turn off your phone. Boot into recovery mode (power + home + volume up). Make a Nandroid backup, wipe data, cache and flash CM13 ROM. Then flash Marshmallow Gapps and reboot your phone.