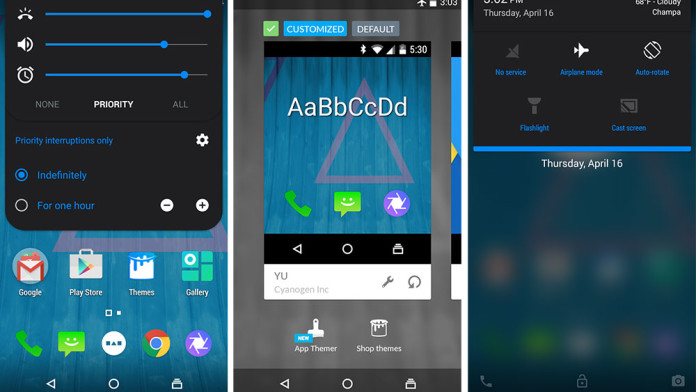 Yu Yureka is the second device to receive Cyanogen OS 12, also known as CyanogenMod 12S ROM after the popular and flagship killer, the OnePlus One. Yu Yureka is relatively new to the market. It has been available for less than three months since its original announcement on January 2015.

The phone is not very popular on the Western world. However, it has found huge support and popularity on Asian developing states, the most important country being India. Yu Yureka comes with a 5.5 inch HD IPS LCD display, Snapdragon 615 processor with Adreno 405 GPU, 13 MP main camera and a decent-sized 2500 mAh.

Announced by the YU CEO on the forums, the CyanogenMod 12S has started rolling out for Yu Yureka. It is based on Android 5.0.2 Lollipop and introduces bug fixes and new improvements, as well as CyanogenMod features.

CM12S comes with extra theming options, Exchange support, CyanogenMail and multiple account integration. CyanogenMod 12S comes in the form of OTA, so you need to be on stock CyanogenMod 11S to be update to officially download the new firmware. If you are on stock, make sure to go to Settings > About Phone > Software Updates and hit the “Check for updates” button.

If you have already updated, let us know how the new experience on your phone is, do you like or is CyanogenMod 11S better?