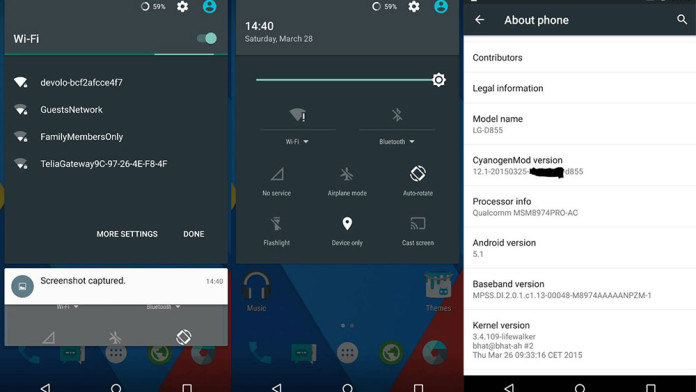 Android 5.1 has already made its way to a handful of smartphones but the LG G3 is not of them at the moment and LG hasn’t announced any possible release dates for the update. If you can’t wait to taste Android 5.1 Lollipop on your phone, Life Walker has released a CyanogenMod 12.1 build for the LG G3 D855.

CyanogenMod 12.1 ROM for the LG G3 features Android 5.1 Lollipop with all the latest features and options. Since the ROM is not developed by the CyanogenMod team, the build is not completely stable. There are bugs present like no data connection and WiFi issues. If these bugs do not stop you from installing the ROM, follow the guide below.

Note: This CyanogenMod 12.1 ROM build is designed for the LG G3 D855 variant only. Do not try installing the ROM on other variants or other devices because you can end up bricking your phone.

Warning: Flashing the CyanogenMod 12.1 is not safe. It is a custom ROM and you can damage your phone if you do not follow the instructions. NaldoTech shall not be held responsible for anything that might happen to your phone.

Check the battery level percentage and make sure that it is above 70%.

The first boot may take a while since the phone will be running a brand new version of Android. Once the phone boots up, you will enjoy the Android 5.1 Lollipop experience on your LG G3 D855 thanks to CyanogenMod 12.1.