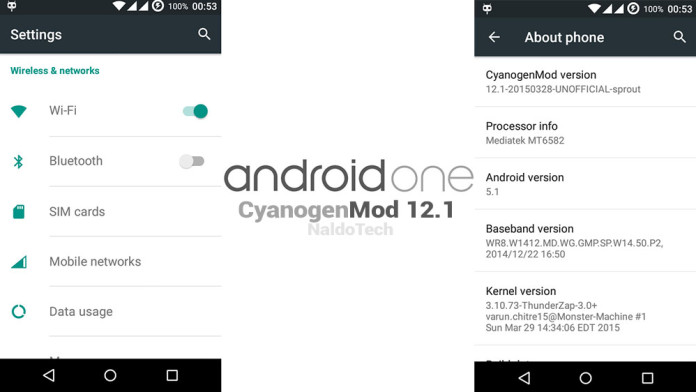 Google launched the Android One line with the aim to provide smartphones with decent specifications and low price to those countries that cannot afford buying an expensive high-end flagship device. Not only they have a low price, they also receive frequent updates. Android One devices are basically downgraded Nexus devices.

The Android One platform was originally announced with Android 4.4 KitKat on board but Google provided frequent firmware releases, updating the platform and all devices to Android 5.0 and now 5.1 Lollipop. While the official 5.1 update is great, a better idea would be to install a custom ROM like CyanogenMod 12.1. CyanogenMod 12.1 is based on Android 5.1 and offers more features than the stock firmware alongside better performance.

How To Install CyanogenMod 12.1 Android 5.1 ROM On All Android One Devices

Warning: This ROM is only for devices included on the Android One platform. Do not try installing it on any other devices as it can cause damages. NaldoTech shall not be held responsible for any issues that can happen to your phone.

Note: You need a custom recovery to flash the CyanogenMod 12.1 ROM.

The ROM works on all Android One devices:

Everything on the ROM is currently working and there are no known bugs.

Install Marshmallow Update on Android One Sprout4 & Root With SuperSU