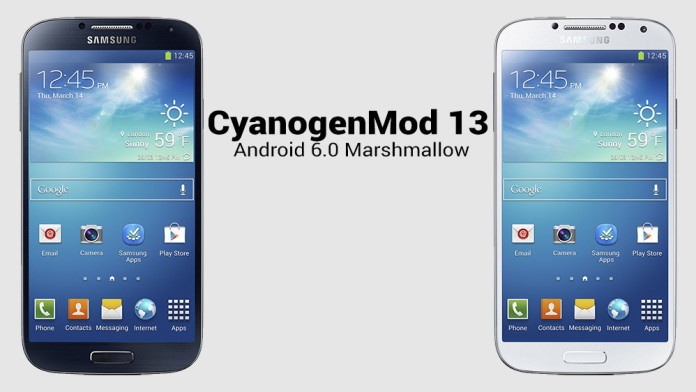 CyanogenMod 13 is reaching more and more devices as days pass by. The Samsung Galaxy S4 was and is still a popular device. Samsung provided software updates for the S4 up to Android 6.0 Marshmallow.

The ROM is available only for the Snapdragon 600 GT-I9505 variant, while the Exynos GT-I9500 receives no love so far. The CM13 build for the Samsung Galaxy S4 is unofficial and not stable. This means the ROM contains many bugs which have yet to be fixed by the ROM developer.

However, this is still the first build. New versions will be released in the future with bug fixes. Even though the ROM is nothing more than a beta build, you would be surprised to see how many things are working.

Mobile radio, RIL (phone calls, mobile data), sensors, camera, WiFi, Bluetooth, F2FS, flashlight and touch screen are all working.  If you want to give this ROM a shot, you can download both the ROM and Gapps (not tested), from the download links below.

The installation process is the same. You need a custom recovery in order to flash the ROM. Turn the phone off and boot into recovery mode (home + power + volume up). Inside TWRP recovery, make a Nandroid backup then wipe data and cache. Then go to ‘Install’ and select the downloaded CyanogenMod 13 ROM. Swipe to flash the ROM. Then flash Marshmallow Google Apps as well. Once you have flashed both files, reboot your phone.

Enjoy the pure stock Android 6.0 Marshmallow experience on your Samsung Galaxy S4 thanks to CyanogenMod 13 ROM. If you have any issues, let us know below.

SourceAntaresOne
Previous article
OxygenOS 2.1.2 OTA Update Rolls Out To The OnePlus 2
Next article
Marshmallow Update For OnePlus One, OnePlus 2 and OnePlus X Will Roll Out Soon