The Google Edition of Samsung Galaxy S4 was released just a few days ago and a battery life test is already done.

This Google Edition of Galaxy S4 has the same proccesor, screen and battery size of the GT-I9505 variant so battery life test results should be almost the same, right? Well, let’s check it out.

When it comes to the Web Browsing test, the Google Edition of GS4 scored 7 hours and 13 minutes, 11 minutes less thenthe GT-I9505 variant 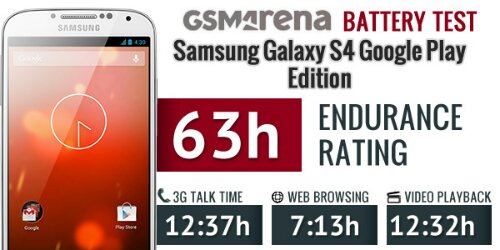 At last but not least, talk time test was the worst for Google Edition Galaxy S4. It scored 12 hours and 37 minutes, which is way low than its brotherbrother’s score that is 18 hours and 3 minutes, a 6 hour difference.

What do you guys think about these scores? Leave a comment below.