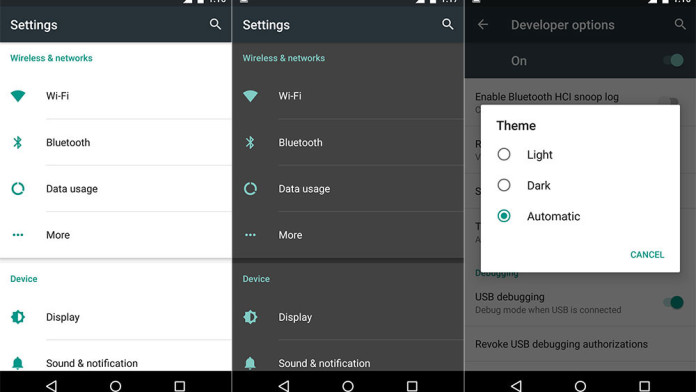 Android M is making waves in the Android community. The newly released mobile platform version is a big improvement over Lollipop. It features longer battery life thanks to Doze, a new feature that shuts down the device while not in use to prevent battery drain, fingerprint support and new options.

The biggest change that Lollipop brought last year was Material Design, a complete revamp of the old Android user interface. The new UI was faster and smoother with eye-catchy animations. Everyone joined the boat and praised the new approach of Google.

But there was a big change that many users weren’t fond of, the white background. Being used with dark backgrounds on earlier versions of Android, users had a hard time getting used to the eye-hurting white background. Besides the fact that it was hard to use the phone at night because of the bright screen, the white color drained more battery on Super AMOLED displays.

Android M has the ability to switch between dark and light Material Design theme built-in. All you have to do is to find the option and switch from light to dark and vice versa. Here’s how to do it.

How To Switch Dark & Light Theme on Android M

The first thing you have to do is to enable Developer Options. You can easily do so by heading over to Settings > About Phone and quickly tapping on the Build Number.

The phone will automatically switch from light to dark Material Design theme on Android M. You don’t have to restart the phone for the effect to take place.