Buy ZeroLemon Samsung Galaxy S5 7500mAh Extended Battery on May 14th or preorder it now on Amazon. The Samsung Galaxy S5 has a 2800 mAh battery which is 200 mAh bigger than its predecessor, the Galaxy S4. For a normal user who uses the phone just for social media, YouTube and browsing the internet, it is going to be enough.

Also, without forgetting the Ultra Power Saving mode which is just awesome for a normal user. However, for a power user who uses the phone for heavy tasks such as playing graphic intense games and likes to have the brightness turned all the way up, the original battery is not enough. 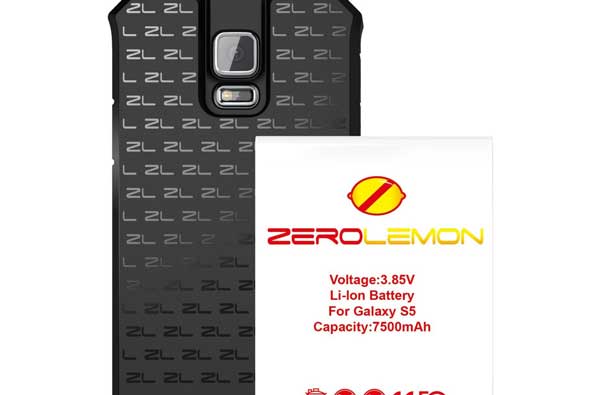 That’s what extended batteries are for. ZeroLemon has just announced the biggest extended battery you can get for the S5. Zer0Lemon battery is 7500 mAh, 2.6 times bigger than the original battery. Having such a high-capacity means that your phone will last more than a day even after playing hours of games and brightness set at maximum.

Because the capacity is so high, the battery itself is large too. Besides the battery, you also get a TPU case to cover the phone because the original S5 back cover does not fit with the new battery. The good thing is that the case is designed to handle heavy shocks and hard drops.

If you get thus battery, you don’t need to buy a case. If you want to buy ZeroLemon extended battery, you can preorder it right now on Amazon or wait until May 14th.