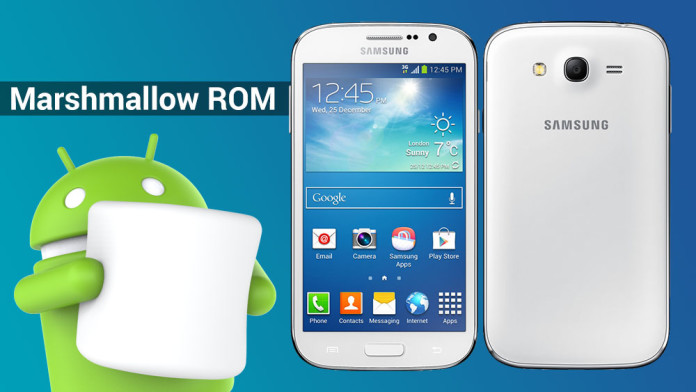 The Samsung Galaxy Grand Duos has received a working Android 6.0.0 Marshmallow ROM build. Thanks to member “pawitp”, you can enjoy Marshmallow on your Galaxy Grand. The Galaxy Grand is an old device released back in 2012. It features a 480p display, 8 MP camera, dual-core processor, 1 GB RAM and 8 GB of internal storage.

Samsung updated the phone to Android 4.2.2 Jelly Bean and then dropped the official support. Even though the Galaxy Grand Duos has very old specifications, this didn’t stop the developers from creating a custom ROM based on Android 6.0 Marshmallow.

The AOSP ROM gives you a complete Marshmallow experience. Since it is an old phone and the ROM is in beta stages, there are many bugs that remain to be fixed. Things like WiFi, Bluetooth, camera, sensors, video, audio, and GPS are working without problems.

However, things like RIL (phone calls, SMS messages, mobile data), radio and other stuff are not working. So this is not a stable ROM by any means. You should flash this only if you know what you are doing and only to get a taste of Marshmallow.

How to install AOSP 6.0 Marshmallow ROM on Galaxy Grand

Note: This AOSP ROM only works on the Galaxy Grand with model number I9082 and I9082L. Do not try this ROM on any other variants or other phones. You might brick your phone.

Your Galaxy Grand will now reboot and you will be greeted by the stock pure Marshmallow experience.