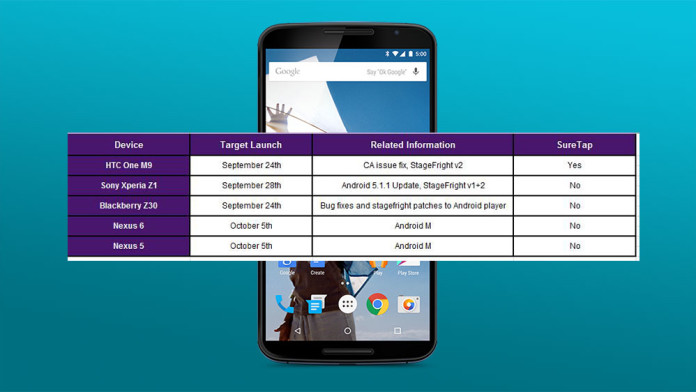 According to an update schedule released by Telus, the official Android 6.0 Marshmallow release will be rolling out for the Google Nexus 5 and Google Nexus 5 on October 5. This is the first time that a telecommunications company releases information about a possible release of Android 6.0.

Google has already announced that it will be releasing new flagship Nexus devices on September 29, just 3 days from now. According to various leaks, Google will release a new phone named Huawei 6P and LG Nexus 5X. These two will be Google’s flagship phones for this year, leaving behind the gigantic LG Nexus 6.

According to the list, Nexus 5 and Nexus 6 will receive the Android M software update on October 5, while other Android phones such as HTC One M9 and Sony Xperia Z1 are set to receive smaller updates which contain StageFright bug patches and performance improvements.

All we can do now is wait and see if October 5 will be the final date of Android 6.0 Marshmallow release, or Google will postpone it.